Alastair Campbell, the BBC and a FOI request

In June Alastair Campbell published his latest book, 'Prelude to Power'; it was obvious to me that in the lead-up to, and just after, the publication, Campbell was appearing extensively across all BBC channels - radio, TV, national and local. Given the fact that the BBC is tasked with impartiality and, supposedly, stands apart from commercial activity, I wondered just how Campbell was being given so much exposure to promote his book. Then on 3rd June, Campbell tweeted:

I pondered on how many non-BBC employees may be left alone in this way, then read his blogpost - at this point I realised that his exposure on the BBC was far beyond what I had been aware of; in fact it was Campbell saturation of the BBC. 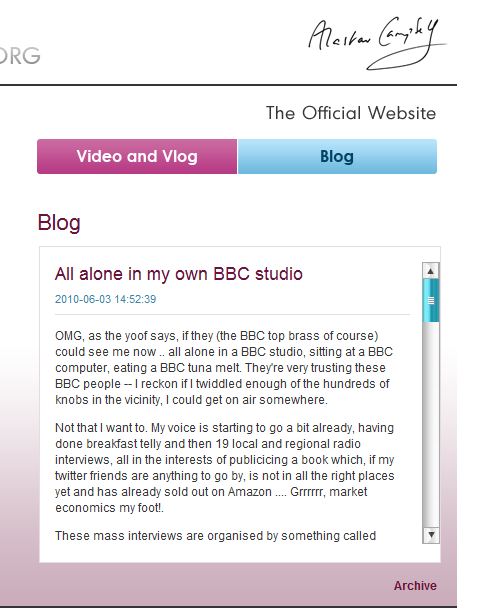 At this point I decided to put a Freedom of Information request in to the BBC, which I wrote as follows:
Could you please supply me with information on the number of appearances Alastair Campbell has made, and is scheduled to make, on all BBC TV and radio channels from 18th May 2010 up to, and including, the 6th June 2010.
Thank you and kind regards,
Pam Nash
I received an acknowledgement and 3 weeks later the following, as a .pdf attachment: 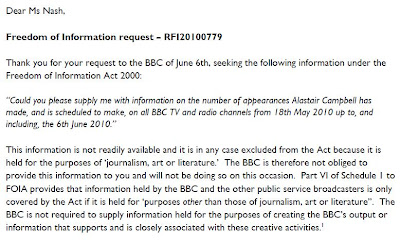 So the BBC are saying the information is excluded from the Act, which is no doubt factually true; but they go on to say that they're not obliged to provide this information, so won't be doing so. But why not? By paying my licence fee I am, in effect, a shareholder in the BBC - so am I not entitled to the information? I cannot imagine that collating it would take a BBC employee so long, a couple of hours, maybe?
But perhaps I am remiss in not also asking the BBC another question, in light of this Campbell tweet, which I hadn't seen when I submitted the FOI request:

'Sky not bid'? Bidding usually involves money - so did the BBC pay Campbell? Even if they didn't, can anyone remember another author having so much BBC airtime to promote their book? 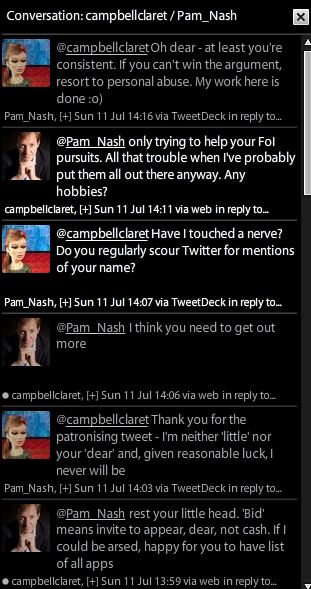 Pam Nash
United Kingdom
Just me. Nothing added, nothing taken away. Talk to me on Twitter, I'm @Pam_nAshes